As I’ve learned as a passenger in an RV, driving one requires more foresight than driving a smaller vehicle. After all, RVs can’t brake as quickly. Safety is critical in any automobile, but safety is even more crucial in an RV. The farther a driver can see, the better the driver can react to obstructions like deer, potholes, and other drivers. It's a good thing that the best LED headlights for an RV can reduce the likelihood of an automobile accident.

Understanding the Best LED Headlights for an RV

The best LED headlights for an RV are mostly plug and play, though your specific make and model of RV may have special requirements.

But most LED light manufacturers have a return policy and a warranty that lasts for up to two years. So, the good news is that you shouldn't have any problems if you need to return them for set that works better with your model.

However, before purchasing the LED lights for your RV, you should consult the manual to ensure your new lights are compatible.

LEDs, or Light Emitting Diodes, are different from regular bulbs in one key regard: They don’t have a metal filament.

Although they're powered by electricity, their light comes from electrical current through a semiconductor material. As such, they have lifespans similar to that of a transistor. LED lights have significantly longer lifespans than filament bulbs, and are much more energy efficient. 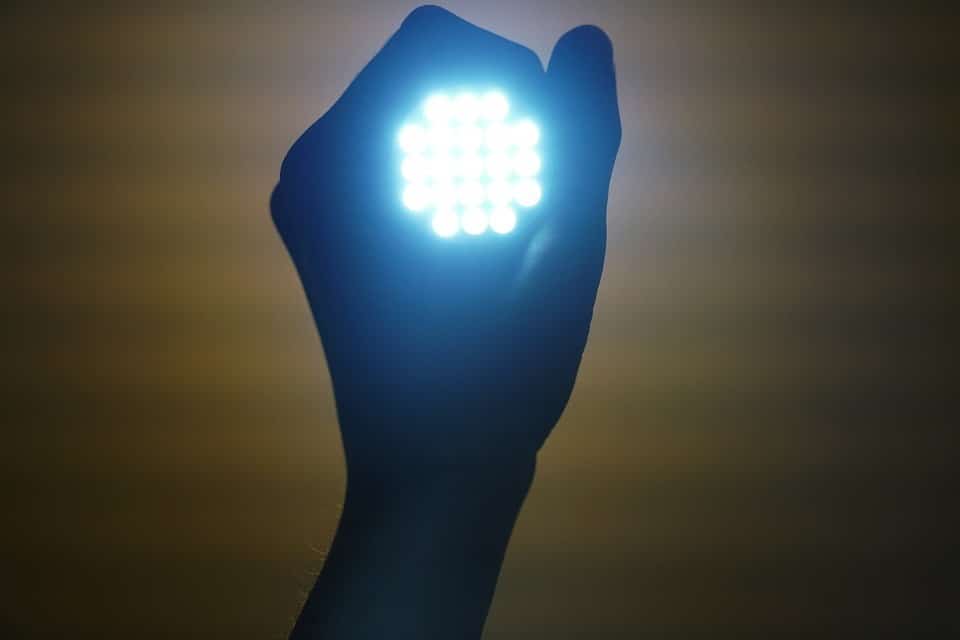 Image by engin akyurt from Pixabay

If you’ve never used LED headlights before, it’s understandable that you’ll ask some of the most common questions.

LED lights are not universally interchangeable. Some may not fit your make and model of vehicle. However, for the most part, they are standard and plug and play.

Generally speaking, the best LED headlights for an RV are legal in the United States. However, laws vary from state to state. You should always be aware of local vehicle regulations.

3. How bright are LED lights?

LED lights vary in brightness and intensity. Nevertheless, most LED headlights vary between 6,000 and 12,000 lumens.

4. Will LED lights blind other drivers?

5. Do LED lights use more power than regular lights?

LED lights are drastically more efficient than halogen bulbs because they don’t waste nearly as much energy in the form of heat.

Introducing the Best LED Headlights for an RV

The best LED headlights for an RV are typically quick and painless to install.

More often than not, they are also brighter than most standard halogen bulbs. If you want to know whether or not the best LED headlights for an RV are brighter than factory bulbs, you can compare their lumen rating.

The following RV LED headlights range from 6,000 to 12,000 lumens, which can be up to 220 percent brighter than regular headlights. 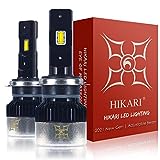 The first of the best LED headlights for an RV is the HIKARI LED Conversion Kit-H7. This particular model’s maximum light output is 9,600 lumens, which the manufacturer claims is 220 percent brighter than a standard headlight bulb.

Also, these LED lights do a commendable job of withstanding heat. They passed a seven-day, 300-degree Fahrenheit stress test. In addition to being brighter than standard bulbs and resilient to heat, this model even has an adjustable beam.

Positive customer reviews had a lot of good things to say about the product. For instance, customers found the product was quick and easy to install. Additionally, several customers claim the LEDs are many times brighter than the factory bulbs.

Conversely, some negative customer reviews recommend hanging on to your old bulbs. One customer claimed the lights didn’t last for more than five or six days. 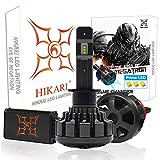 ​​The next best LED headlights for an RV is another HIKARI model, namely the Kit-H1. This model costs more than the previous HIKARI model, but it is more powerful and has more features.

Also, I'm happy to see that this model has a two-year warranty, so you don’t have to worry about them burning out or breaking in the short-term.

Interestingly, HIKARI patented its technology for this model to improve the uniformity of its beam pattern.

Like the previous model, satisfied customers gave positive reviews claiming the lights were very simple to install. Positive reviewers took before and after pictures showing how much brighter the lights are.

Nevertheless, some negative customer reviews thought the lights were only nominally brighter than halogen lights. 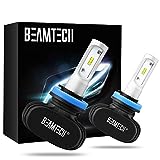 ​The next contender for the title of best LED headlights for an RV comes from BEAMTECH. This model is considerably more inexpensive than the previous two models, but it is also weaker.

The lumen output on this model is only 8,000 between the pair of lights. Still, the manufacturer claims the lights have a long lifespan. BEAMTECH claims they’ll last more than 30,000 hours of use, which is equal to 1,250 days (or 3.42 years).

Furthermore, BEAMTECH claims this LED product has low lamp heat, which contributes to its longevity.

This model has a 6500K xenon white color and earns a high rating on Amazon.

Positive reviews frequently comment on this model’s affordability. Most users like the light output, too, even though this model isn’t as bright as the previous two.

Conversely, a top critical review claims that the product didn’t work right and that customer support was atrocious. 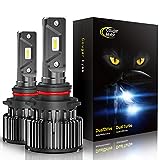 ​Cougar Motor manufactures the next best LED headlights for an RV. They claim this model has a 7,200-lumen output and that these LEDs are 200 percent brighter than stock halogens.

And Cougar Motor says this product is plug and play, and that you can install it in under 20 minutes.

This model has a two-year warranty that will protect your investment in the long-term.

One customer raved about the fast response time from customer support. And most positive reviews commented on how easy they are to install.

One negative customer review, however, claims that the driver-side light went out in under two years.

​​JDM manufactures an all-in-one conversion kit that’s one of the best LED headlights for an RV.

This model is somewhere in the middle of the market with regards to its brightness. It has a light output of 10,000 lumens, and each bulb will last up to 20,000 hours in 25 degrees Celsius temperature.

JDM designed this model to dissipate heat by casing the LEDs in 6063 aviation aluminum. The light color of this model is 6500K white, and each LED light is 40 watts.

Best of all, the manufacturer provides a one-year warranty that covers manufacturing defects and items that are damaged during delivery.

One mixed customer review said the emitted light was very clean, but a bit too noisy for their liking.

On the other hand, a top critical negative customer review claimed disappointment because their old low-beams were brighter than these LEDs. 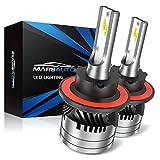 The Marsauto 9008/H13 LED Headlight Bulbs are more toward the middle of the market, though they are brighter than most.

This model is one of the best LED headlights for an RV because they offer bright 12,000 lumen light output. Also, they’re CANbus-ready for most vehicles and don’t blind oncoming traffic.

The LEDs in each light use the latest CSP (Chip Scale Package) for efficient energy consumption and low heat output. Like most other products, this model is also plug and play. Additionally, I like how the manufacturer warranty lasts for 24 months.

One of the top critical reviewers didn't like this product because he felt the light patterns were terrible.

Conversely, I saw several positive customer reviews that had good things to say regarding the longevity of the lights. 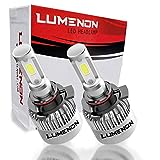 ​Another of the best LED headlights for an RV is the Lumenon 9005, priced more towards the inexpensive end of the market. As such, it offers a lower lumen output than most other models with 7,600-lumen power. Also, the light color is 6000K white to help you drive more safely during the night.

I found it interesting that Lumenon specifically states it has a support department in the United States. It can be a real hassle dealing with an overseas representative that poses communication challenges. Additionally, this product does come with a one-year manufacturer warranty.

The positive reviews commented not only on its affordability and ease of installation but also its great color temperature and sharp beam pattern. 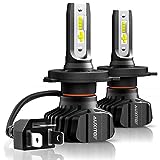 The AUXITO H4 9003 is undoubtedly another top competitor for the best LED headlights for an RV.

The H4 9003 model is a mid-to-low market offering and offers a 6500K xenon white light at 9,000 lumens. The lights are adjustable with high and low beam modes, and the lights are quiet because they lack a fan.

Like previous models, this product can get away with not having a fan because it uses aviation-grade aluminum. Even without a fan, the manufacturer claims this product will last for a minimum of 30,000 hours.

And note that each bulb has eight of the latest Korean CSP LED chips as well.

As far as the warranty is concerned, you’re covered for up to 24 months after purchase should there be a failure. 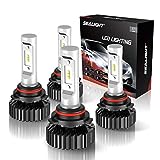 Our next option for the best LED headlights for an RV is made by SEALIGHT and is a mid-to-high market offering.

Like the previous model, the 9005/HB3 also includes the latest and greatest CSP chips. Despite its higher price, I was surprised to see the lights only have 6000 lumens of output and 6000K light.

Nevertheless, I suppose there is a trade-off between brightness and longevity.

SEALIGHT designed this model without any internal fans, which reduces noise.

In addition to naming it an easy-peasy upgrade, top positive reviewers commented that these LED lights not only helped improve visibility at night but that they also made the vehicle more noticeable by others.

A top critical Amazon review, conversely, commented that even though the low-beams were great, the high beams were disappointing. 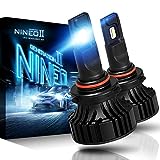 I also liked how the beam angle is adjustable, so a driver can personally adjust where they direct the light for better vision at night.

Being that this model of LED is so bright, NINEO built these LEDs with a unique coverless dual ball bearing fan. In addition to a fan, this model also has an ultra-thin heatsink to wick away excess heat.

NINEO offers a one-year manufacturer warranty, which is relatively standard among LEDs.

Customers repeatedly comment that these LED headlights improve visibility, even in the darkest conditions.

One negative review commented that they didn’t understand the lumen rating was for a pair of headlights, as opposed to a per-unit lumen rating.

Shedding Light on the Best LED Headlights for an RV

If you’re curious about the brightness of the best LED headlights for an RV, I highly recommend looking at relevant Amazon reviews. Many customers, be they positive or negative reviewers, post side-by-side pictures of factory headlights in contrast with LEDs.

Though seeing something in real life is better than a photograph, the pictures posted in Amazon reviews will highlight the stark contrast between halogens and LEDs.

If you have any personal stories, experience, or questions about LED headlights, I invite you to comment below.